Many years ago, I had the privilege and joy to meet David Hurst.  He became a friend, mentor and inspiration to me.  David left many gifts to the world, one being his first book copy, which he tasked me to make available on the internet for free.  It is below in exerpt, and at the bottom of this page in entirety for free reading. It is as relevant today as it was when David lived and wrote those wise words. There is also another compilation of books and presentations, and meditation CD's available to purchase below or at the Madasi Love online store.  Enjoy. 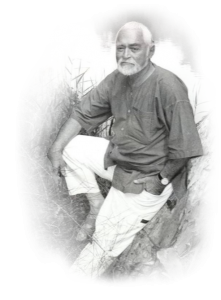 An exerpt from the book "Hurst - All in The Mind":

David Hurst was a Buddhist Meditation master born in Sydney, Australia in 1929, of an English father and a Chinese/Eurasian mother. He received his higher ordination as a Theravadan Buddhist monk at a Thai monastery established in the Sussex countryside for the British Buddhist Society. At that time, he was formally known as the Venerable Jayamangalo (Tan Jai to his friends).

After leaving the monastery, David taught in England for a time before returning to Australia and teaching in South Australia, Victoria and finally, Queensland. David helped many people with diverse problems and illnesses.He “unzipped the Earth suit” (his words) on 9th August 1995 - when he felt his work was completed.

“No sad songs for me”.
HAPPY TRAVELLING DAVID

David Hurst - All in the Mind, Eastern Philosophy made easy for the Western Mind

The Book
"All In The Mind: Eastern Philosophy made easy for the Western Mind" is a compilation of works by David Hurst.
It combines two books and transcripts of talks. The two books are "All In The Mind" (available below, free to read on this web site) and "Aspects of Being".  The transcripts are from a series of three talks titled "You Create your Own Reality", given by David at the Theosophical Society in Adelaide in 1986.

Hurst - All in the Mind

More from the book.

COMMENTS FROM SOME WHO KNEW HIM   David Hurst was a wonderful example to us of the reality of the death experience. This very practical man of immense capacity of compassion and love for humanity, faced his own mortality without fear.
At David's request I was there to minister to his bodily needs during the dying process of what he referred to as “taking off this space suit.”
It was a privilege to see him through this very private period with no outside interference to his determination not to be put up on a pedestal. He abhorred the thought of being treated as “special.”
Some individuals, not grasping the central message of David's teaching, expressed “how dare he die of cancer, why didn't he cure himself?”
Well, I have news for you. David faced death with absolute tranquillity. Control over pain by the power of mind alone, no drugs, no fear, looking forward to the journey from the illusion of this physical plane and with great anticipation for the next adventure.
David lived up to his own teachings right to the end, at peace with having manifested his own purpose in life and discovering the glory of being an eternal aspect of “all that is” with tremendous good humour.
In doing so David has contributed immensely to the understanding and enlightenment of humanity. What better gift could he have left us, a self-help blueprint to the core of his teachings, by turning within during meditation we can discover our real selves. “We are here to fulfil our potential, the meaning and purpose of our lives is to manifest the glory of who and what we really are and thereby manifest the glory of God. Our lives have no other primary purpose.”