All In The Mind

David Hurst – All in The Mind

This publication is a compilation of David Hurst works: the books, ‘All in The Mind’ and ‘Aspects of Being’, and the transcripts from a series of three talks titled ‘Create Your Own Reality’.

All in the Mind:  Eastern Philosophy made easy for the western mind, is a combination of the books, All in The Mind, Aspects of Being, and the transcripts from a series of three talks given at the Theosophical Society, Adelaide, in 1986 titled “You Create Your Own Reality”.

David Hurst, Australian-born in 1929, to an English father and Chinese/Eurasian mother, was a Buddhist Meditation master. He received his higher ordination as a Theravadan Buddhist monk at a Thai monastery in the Sussex countryside for the British Buddhist Society and was known as Jayamangalo, Tan Jai to his friends.

The first book of David’s work – All in The Mind – can be read for free on this website, here. 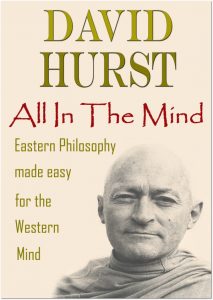